32-pages with CD with Narration by Kjerstin Dellert and Royal Chamber Orchestra. 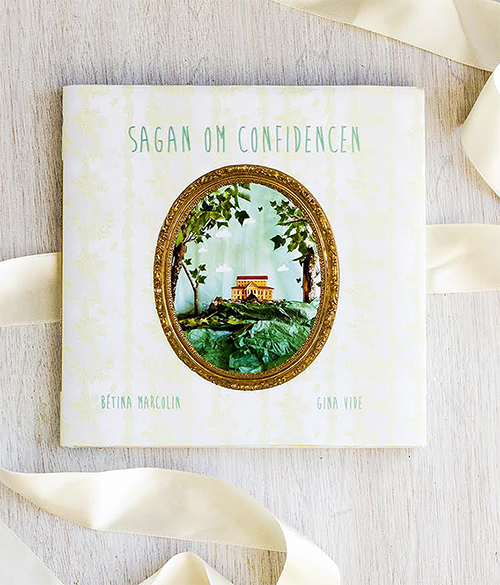 Children’s Historial Picture Book (Swedish Language) Saga on Confidencen is a fairytale-of-a-story that (mostly) happens to be true of how the Royal Ulriksdal Castle Theatre, Confidecen awoke.

This tale stretches from King Gustav’s childhood  and continues to our present day through this gem of a story: how a sleeping beauty -of a castle, awoke and bloomed and ushered in the arts and ballet —- and now continues through the efforts of Princess Christina and Opera Singer, Kjertin Dellert.

I was very inspired by the idea of  the theater within the story and choose to illustrate the story using paper doll theater. I re-created the theater by building 3D painted cardboard sets of the theater and painted Paper Doll Characters that were then placed and photographed page by page to become the illustrations.

The book is accompanied with a CD that has been dramatic reading by, Opera singer,  Kjerstin Dellert, and is accompaniments by the Ulriksdal Royal Chamber Ensemble.   The music is appropriate to the timeline.

Above : Saga Om Confidencen.  The book opens with two boys playing and finding an abandoned building.

Above; Kjestin Deller, in the present day stage of the theater,  narrates the book, and opens the story by telling the tale and how the now, Royal Ulriksdal Castle Theatre, Confidecen, was at one time a Royal Horse Stable.

Saga om Confidencen: Queen Ulrika and her son, Prince Gustav, waiting for the French Ballet troupe to arrive to their castle in Sweden.The book starts with the discovery of the abandoned theater and then, goes back to the time when Louisa Ulrika of Prussia, in 1744, marries Adolf Frederick, King of Sweden and moves to Sweden. Queen Ulrika is not satisfied with the arts and social scene she discovers in Sweden. She renovate, innovated and brings the French ballet to Sweden, opening the Royal Ulriksdal Castle Theatre, Confidecen. Her son, Gustav, continues to develop the arts culture in Sweden and  builds  the first Royal Opera House in Stockholm.